”Atiku is my godfather,I swear to Allah,if baba Buhari contest in 2019,I wouldn’t mind being sacked.I will vote Atiku”-Minister of Women Affairs,Aisha Alhassan says in an interview with BBC Hausa 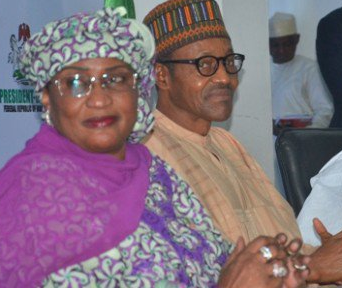 Okay fine,everyone has right to choose whatever he or she wants to do.That is how God created us humans. In constitution too,we  have enfranchisement,that is the right to vote and be voted for. This means we can actually choose whoever we want to vote for in any given election and at whatever time it is. Look at the statement expressed by the Minister of Women Affairs,Aisha Alhassan : ”Atiku is my godfather,I swear to Allah,if baba Buhari contest in 2019, I wouldn’t mind being sacked. I will vote Atiku”. What would you say about this? The Minister of Women Affairs in the Buhari led government has declared that come 2019 general election,she is not going to vote for Buhari even though he gave her the opportunity to be part of his government,but that she will rather vote Atiku Abubakkar.

There is nothing wrong saying or having whoever one wants to vote for. However,why should one emphasize that ”because he is my godfather” I will vote him? You see the point? It is on the basis of godfatherism oriented spirit that some people exercise their free right to vote and be voted for,and not because of merit anymore. If the Minister says she will not vote Buhari in 2019 because he is no longer fit,it would have been a very reasonable point coming from her.But to say because Buhari is not her godfather? Hmm…

See again her full speech on who she will vote in 2019,and why:

“Atiku is my godfather even before I joined politics. And again, Baba Buhari did not tell us that he is going to run in 2019. Let me tell you today that if Baba said he is going to contest in 2019, I swear to Allah, I will go before him and kneel and tell him that ‘Baba I am grateful for the opportunity you gave me to serve your government as a minister but Baba just like you know I will support only Atiku because he is my godfather.  If Atiku says he is going to contest. If because of what I said, I am sacked, it will not bother me because I believe in Allah, that my time has elapsed that is why… Baba is not a mad man like those calling for my sack. They have been sending it and spreading that if Baba sees this I will be sacked‎.” she said.

Did Aisha care whether Atiku qualifies for presidential election or not? No, She just wants to vote Atiku to prove her loyalty to him whether he is qualified or not!

If a Minister can say a thing like this,having this sentiment,how much more other citizens of Nigeria? If everyone votes based on sentiment and not on merit,what will governance look like???

”It is not easy being single. It is not something I ever wanted!” Angelina Jolie reveals

” Men who treat their wives badly,do not know they lock the heavens over themselves” says the gospel singer and pastor Nathaniel. See the reasons:

'' Men who treat their wives badly,do not know they lock the heavens over themselves'' says the gospel singer and pastor Nathaniel. See the reasons: