At What Age Should One Start Thinking Of Marriage? 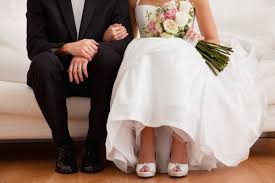 Well I don’t get it! I no longer understand if age still has anything to do with anything these days otherwise I wouldn’t know why everyone including minors seem to be having a romantic affairs with an opposite s*x.

When you go to secondary school you would find out that almost every girl is already having a boyfriend. At that tiny age. What do they talk about? S*x and romantic issues! And when you come down to society,younger girls are taking over marriage these days while the older ones are busy building up somewhere as if marriage is not for them. What is really happening? Is there a particular age ripe for marriage? At what age should one start thinking of marriage?
I remember there were days when men would be afraid to tell parents of girls they were attracted to that they were interested in coming for marriage with their daughters. Why? Because they thought that ladies in their early teens were not really mature for marriage. But what do we see now? Girls in their early teens are being taken and given in marriage whereas those in their middle teen are considered old and too mature to be considered.
At What Age Should One Start Thinking Of Marriage?
If this question is given to a group of people or thrown for a public opinion you would hear such things as:
”Girls should marry as soon as they meet their suitors.” ”As early as possible. ”The sooner the better”. ”There is no specific age for marriage. One should get married when he or she deems it fit.”
I do not know if your opinion is given above or if you share any of the sentiment mentioned above. If  your opinion is something quite different,please feel free to share with us.
There is an answer in the greatest book of wisdom called Bible. If you could get a copy of it,it says in 1 Corinthians 7: 9 : ”But if they do not have self-control,let them marry,for it is better to marry than to be inflamed with passion.” Also,verse 36 of the same chapter says ”But if anyone thinks he is behaving improperly by remaining unmarried and if he is past the bloom of youth,then this is what should take place: Let him do what he wants;he does not sin. Let him marry.”
Verse 9 says that if one does not have self-control let him or her marry. Then you could imagine at what age one begins to develop feelings for opposite s*x to the point that he or she could no longer control it. But to make it right,verse 36 of chapter 7 of 1 Corinthians say ”if he is past the bloom of age.”
At what age should one start thinking of marriage? The greatest book of wisdom,not human philosophy says ”When one has past the bloom of age.” And if you ask me,I would say that is very reasonable!
That you allow yourself aroused with s*xual feelings is not a sign you are mature for marriage. Yes,romantic feelings for someone you are attracted to is very normal for any creature having blood and flesh. But you have to keep it under control. You have to wait until you have past that bloom of youth when every boy or girl seems good and perfect in your eyes.
There is no particular age bracket that is stated ripe or right for marriage. The only guidance is when one has past the bloom of youth! Have you past your bloom of youth? Have you come to know that qualities are important possessions which get one qualified for marriage? Are you now convinced that love is not about s*x or what you feel for an opposite s*x? Then you are getting ripped for marriage if your answers are resounding yes!!!
Highlighted subtitles on the age one needs to start thinking about marriage…

How To Build A Happy Relationship And Stay Together Forever

Should I Tell A Suitor I Already have A Boyfriend?

Should I Tell A Suitor I Already have A Boyfriend?