”As far as I am concerned,Buhari’s first term is bad.It’s below the average mark”. Nigerians react to Buhari’s statement on achievemnet in office,so far 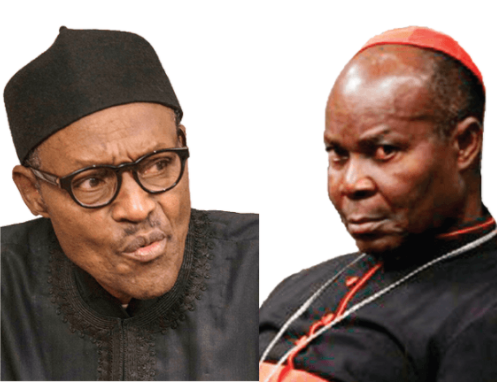 Well Nigeria had her INDEPENDENCE celebrated yesterday,1st of October,2017 as they would do every year. As far as the presidency was concerned,Nigeria had every reason to celebrate her independence as it counted as its achievement,57 points promises

Funny enough,while the president of Nigeria,President Mohammadu Buhari declared that he has achieved in his office,57 points promises made to Nigerians during his campaign,the citizens could not mention any remarkable thing he the president has achieved so far in office. Not even one point!
At the ceremony however,the president also declared his intention to run for the second term as Nigerian president in 2019 coming  presidential election with all hopes that Nigerians,will do it again for him,making him their next president. However,here is the reaction of the Archbishop Emeritus of Lagos Archdiocese, Anthony Cardinal Olubunmi Okogie,who in a recent interview with Telegraph said that President Muhammadu Buhari has so far performed below average, warning that Nigeria will be worse off, if he gets a second time in office.
Olubunmi Okogie says: ‘as far as Cardinal Anthony Okogie is concerned, his first term is bad; I think it’s below the average mark. So, this will not give him a better chance to stand for a second term. From what is on ground, I don’t think he will get anywhere. The main thing that Nigerians want now is to see the dividends of democracy in action. They are telling us that we have pulled out of the recession. Go to the market, there’s nothing like that. There’s no sign of improvement. What is sold for N10 still sells for N10 or even at N12. Is that what you call improvement of the economy? “They promised to do everything but on getting into saddle, they keep procrastinating. Look at the state of the nation today. It’s as if there is no government’.
Okotie also pointed at the legislature,saying it is again the reason for backwardness in Nigerian governance saying:
“Look at the parliament, what are they doing in the House of Representatives? What are they doing in the Senate? What are the so-called big men doing? It’s very painful. We are going from bad to worse. Very soon, we’ll get to worst if there’s no change before December. Everybody is taking the laws into their hands the way they like. Would you call this a nation? You can’t walk freely on the street. You are not sure of having a meal per day. You are not sure of seeing tomorrow. “People are not asleep. People are opening their eyes every day to see what these people are doing. And that is why they are struggling to have their man at the top. There are many other people lined up. And we’re talking about Buhari and Atiku. Can they even win the primaries? These noisemakers are just making people to know that they are alive’
Well the truth is that Okotie has said the minds of over 90% of Nigerians over President Buhari’s government.Nigerians home and abroad are not happy with the present government of Mohammadu Buhari and I am sure that if you are also asked to have your say on this matter,you will even add more to what Okotie has said.
The question still remains: Who becomes the Nigerian president 2019???
Tags: News-hit
Previous Post

“It is an incredible honor to be the first same-sex couple to marry in Germany” says Kreile,a gay. Is that unbelievable?

"It is an incredible honor to be the first same-sex couple to marry in Germany'' says Kreile,a gay. Is that unbelievable?