And You Expect Shantel To Leave Lover Because Of Rape Accusation? 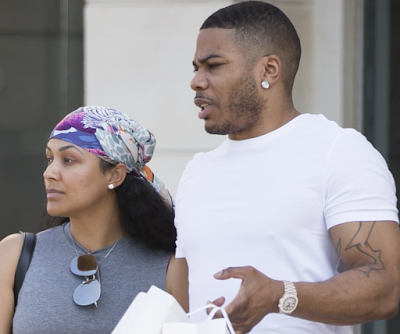 People are honestly so funny!  Why should young girls always be quick at jumping out of relationships at any slight offence? If it has not happened to them to opt out,they would advise others to do the same. WHY?
Okay,rapper Nelly was ACCUSED of rape and all the girls expected on it was for his almost turned wife girlfriend,Shantel,to leave their deep founded relationship! Why? Because,Nelly has been accused of rape!
Thanks to Shantel for disappointing the new generation of our girls chabish thinking ! Even at the heated accusation of rape,she still stands so strong with her man,appearing proudly with him in public,going high places right on his side.
Please get it right! We are not saying that one should support her boyfriend or hubby at the point when he is wrong and denies fact! What we are saying is that girls,our ladies should learn to support their men in their trial and trouble times.  They should help them to endure and come out fit. That is why you are there!
If you being the closes friend and partner of your man do not stand on his side at his troublesome   times,who will? How do you even prove that this is somebody you would really love to spend the rest of your life with?
If Shantel is expected to leave her boyfriend of ages at the point of accusation,what would happen if he is found guilty,convicted and imprisoned? She will just quickly at 1,2,3,jump out of their relationship,deny ever knowing him and rushing into the arms of another man right? You have such a dirty mind if you say yes!
Friendship is the same as relationship as long as mind and heart are in involved romantically. If the affairs share love and feelings,both the man and the woman are there as in husband and wife. They can be seen as inseparable partners except if the relationship is false and under claim!
Shantel is as wise as she is beautiful! No matter what people say,no matter the gossip and accusation,she is always by the side of her man! She is no gonna leave him for another girl to take over!!!
Tags: single & Married
Previous Post

”I am Open To Love And I Pray For Life Partner” -Actress Eucharia Anuobi See Full details!