Photo: A rapist sentenced in prison for 71 years,clapped his hand and
says: ”At least I’m alive’‘ 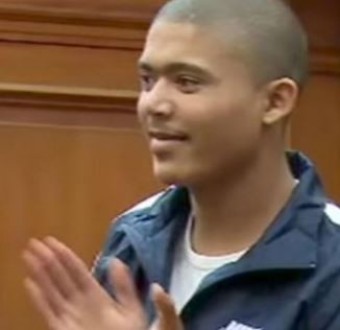 If there is any reason why evil or wrong  doers,those who are guilty to human laws and conscience are imprisoned,it is for them to be taught to have conscience,to be remolded and be put into normality,to be reformed and be made to be of good character. How can someone,a known rapist and serial killer who is to be jailed for 71 years,clapped his hand in court and says: ”At least I’m alive”? Who told him he is alive? Did he realize that he is 20 years old,a full grown adult and will still spend 71 years in prison? This is to say that by the time this young man will be release from prison,he will have been 91 years old . Is he truly alive? This young man is like an unremorseful rapist released saying: ”At least I ‘m alive”.

From the story released,this young man who has been sentenced to prison for 71 years,for raping girl child was making this statement: ”At least I’m alive” in order to mock and taunt victims families,whose children he had raped. The story again reviews that this serial killer stabbed his last target 98 times! We can see the reason and the wisdom in the court judgement to imprison him for life so that by the time he is let lose out of prison,his tentacles will have been broken,his power to do evil and bring pains to humanity will have been faded!  Since this young man is so unremorseful to his wicked and heartless actions,he is like an unmorseful rapist released saying: At least I’m alive”! This is because,being this hard hearted,he can manage every situation in prison,to make it aliveto 71 years and still come out to do more!

Why was the rapist upon being charged and found guilty before the court of law,upon being sentenced be so proud to say ”at least I’m alive to his victims’ families? He is simply not sorry for his wicked act,neither is he in anyway promising that he will make effort to repent in prison. He is also saying in many indications that whenever he is released,he will still do it again,being unremorseful rapist released saying: ”At least I’m alive”!

Dear parents and ladies,at least you have seen for yourselves that these rapists are inhuman. The only thing that gives them joy is when they bring tears and pains in your eyes! Do all you can to avoid rape,stay safe!!!