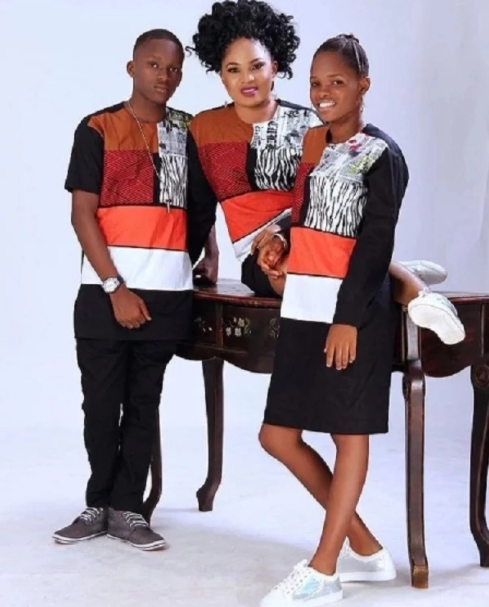 Actress Regina Chukwu and family.
You know,there are some African traditions that everyone should actually say know to and reject. For example,there are traditions that would compel a widow to drink the water that comes out of her dead husband’s body after bathing him just to prove that her hands are clean and that she is not responsible for the death of her husband.
There is another tradition that would force a woman who loses her husband in death to marry her brother in-law if she still wants to continue to be part of the family and the mother of her children. In any case where the woman refuses,she would be thrown out without any thing belonging to her including her children!
The story of Actress Regina Chukwu is similar to this tradition. However,the only difference was that,when her husband died immediately after she gave birth to their second child,she was compelled to remain in the village with her in-laws if she really wanted to be with her children.
Refusing to continue remaining in the village,her 3 year old girl was forcefully taken away from her by her sister-in-law. Here is the story Regina Chukwu shares: 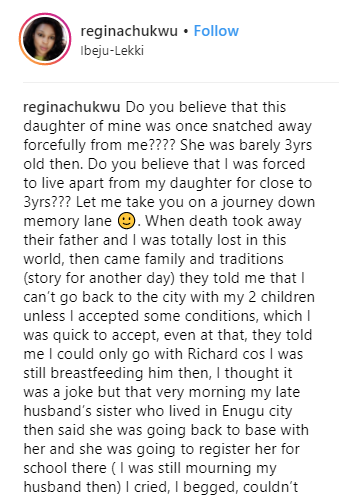 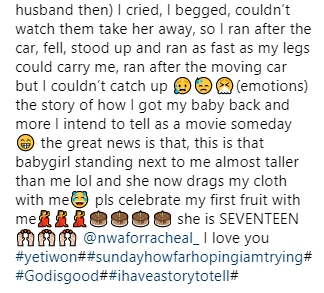 What all these sisters and mothers-in- law fail to understand is that when they restrict their sisters or daughters-in-law from having custody of their children after their husbands die,the children would always go looking for their mothers tomorrow!
Results have proven that no widow on being treated unkindly,unfairly,or denied of having her children live with her after the death of husband remained childless or forgotten by her own children.
Just give them little time to grow up and the children would start going round,looking for their mothers.
So don’t worry too much woman,if it happens to you that your in-laws reject you and deny you the custody of your children because you refuse to accept one odd and senseless tradition of the land,a day of your having your joy all will surely come to you. Your babies will soon come looking for you, taking you back to your home,your husband’s house,or a more comfortable home and give you the right to enjoy the joy of motherhood!
One day,all these old,odd,and senseless traditions will die,giving peace to womanhood I do believe!!!
Tags: celebrity newssingle & Married
Previous Post

The Problem Is Not That The Pastor Was Involved In Social Vices. Here Are The Major Problems For His Imprisonment!

The Problem Is Not That The Pastor Was Involved In Social Vices. Here Are The Major Problems For His Imprisonment!