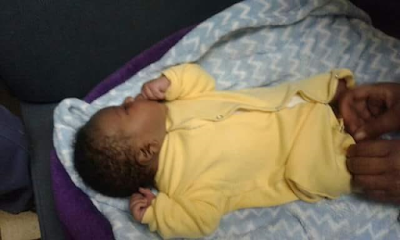 Are we not tired of hearing bad news such as this? Definitely we are,but our hands are not in any way tired of writing,neither are our mouths tired of talking about injurious abuses let out to innocent flesh and blood. Well kudos to the girl child,who didn’t flush the baby as other wicked girls will do,but hey girl,you no try at all. This fine baby,na him you throw away for another person to carry? That is the picture of a dumped baby found that you can see up there.

The sayings of medical experts about how a baby and his mother could communicate while he is still in the womb,makes me conclude that if any woman, girl or lady ever throws her own baby,after 9 months of heavy pregnancy,then,she would have done tot that baby, more than what  Brutus did to Caesar.

Has it ever occurred to those who born and dump their babies that this is a murder thing to do?  Yes,you may say that after all,the baby was not killed,terminated or aborted,but when a baby is helplessly dumped, what provision is made to really keep him alive? You may say : Okay,fine,this baby has been dumped in a place where passerbys can show some mercy and pick him home.” To do what I ask?

The truth is that over 80% of babies found dumped, end up in the hands of ritualists,15% of them are sold to people for whatever reasons while just 5% of dumped babies find themselves in good hands. To say that the only thing a woman who gives birth to an unwanted baby could do is to dump him instead of killing him through abortion is like advising someone who wants to shut his enemy with gun to do so through food poising.

If any girl,lady or woman finds herself pregnant and the person responsible for it denies it,well,it is bad,but not bad enough to dump your own blood in a dustbin,gutter,or even in a bush. The right person you should dump here and there is that irresponsible man that got you pregnant and denied you,not that innocent baby. Every child deserves hope and future!!!