A Thief Who Would Not Want To Be Freed. See His Silly Reasons! 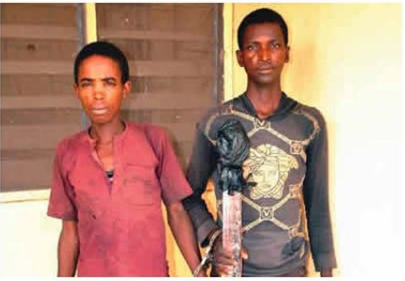 You know,people really have certain reasons why they steal,just as every normal person who does certain things has reasons for their actions.
However,there are obviously silly reasons why people acts stupidly or commit crimes. You can imagine a thief who was caught and arrested by police saying that he wouldn’t want to be released or freed. He says that if he is freed,he will commit crimes again!
“Many people are stealing in the country, including top government officials. People are dying of hunger and there is no job. What else do you expect me to do other than stealing? If am discharged by the police, I will still go back to rob people. The country is in a bad situation,”
Hmm,this is serious.   Shehu Buda says that he steals because,many people are stealing including the government officials. ”What else do you want me to do except stealing?”
Dear Sheh Buda,is stealing a job or a business? Are you retaliating against the government or against people who have done you no wrong?
If Shehu Buda is wise,if he really has common sense,he would have known that he cannot retaliate against the government by stealing from the pockets of hardworking citizens.
Shehu,do you not know the seat of the government? Do you not know any house where a government official lives to steal back or bring back the looted funds? Honestly we don’t understand your wisdom in this act! You steal because the government steals. But unfortunately however, you don’t steal the same way the government or rather,people in government steal!
How many times for example have you heard that government officials steal and they are apprehended and arrested by police? Shehu Buda is really amazing!
Again he says: ” If am discharged by the police, I will still go back to rob people.”
Hmm,this man is really hard up! Did he say if he is discharged by the police,he will still go back to steal?
What is Shehu’s problem? First he has in mind to retaliate and fight the government that is making lives of people very difficult,and unbearable,and he goes stealing from the pockets of none governmental officials who do not steal.
Secondly,Shehu and his friend Bello Mallam have been arrested by police for stealing the sum of N7,400 and two handsets at the value of N9,00 from one Mohammed Mohammed after inflicting injuries on him with machete.
Shehu Buda,do government officials who steal national money do so with machete? Can’t you see you are not stealing as government officials do?
Anyways,Shehu has said that he will still steal more and more if he is discharged or freed! I trust the police know what to do and how to handle Shehu’s case right???
Tags: News
Previous Post

Why I Want To Marry An Albino- Doctor dermatology