by JoJo
in Hot Topics
0 0
0
0
SHARES
1
VIEWS
Share on FacebookShare on Twitter
Really,some people could only understand what sacrifice Christ made in almost 2,000 years ago by making themselves pass through pains and gory when nailed on crossed trees?
Yes,the Bible does say that Christ suffered for all in order that he might test death for everyone,it is also clearly seen in the scriptures that Christ was ridiculed,terribly beaten and treated like a criminal and eventually,he was made to pass through the highest pains one could ever pass through in life on a tree where he was nailed to gush in blood till death!
This is something some people would want to imitate to enable them appreciate Christ’s death and make them understand what he went through on behave of humans.
A Philippine actor,Ruben Enaje has done this for 23 years now,portraying Christ on every good Friday of the year,in his Catholic traditional religious rite. He is 58 years old now,and here are his experiences shared: 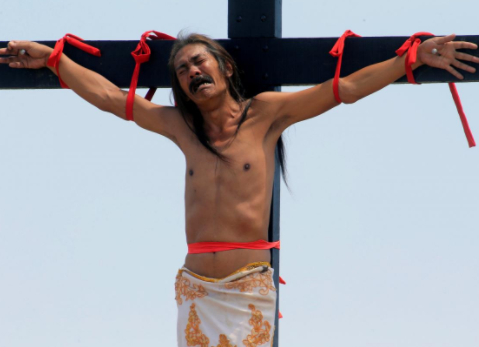 ”In the past, I went home injured and limping, but this year I feel so great,”
Then he continued:
”I feel like he is telling me ‘go ahead, keep it up”.
Surprisingly,the information released on this matter also shows that even women also join in this ritual. Women!
However,what I don’t understand is what sense and wisdom this practice makes since portraying the pains and agony Jesus went through on good Friday before he died does not make them realize or achieve the same purpose.
For example,Jesus suffered pains for us and that was what he must do in order to set humans free from sin and death. He would also have to die to completely achieve his purpose of coming to earth which he of course did!
The religious rite portrayed by some churches on earth today,what is it all about? Who sent them to do this? What is the relevance of the practice since the imitators would not or ever feel exactly what Jesus felt? Why would they even stop at being nailed on their cross without giving up their spirit as Jesus did on the torture stake and say: ”Father,unto your hand I entrust my spirit” and then die?
You say you want to imitate someone by doing what he did only to choose what part to take in doing so. Are you really sincere? What are you doing?
”The Catholic Church in the Philippines tolerates the ritual but says it does not support such gory displays of devotion, describing them as a “misinterpretation of faith”  says the report. And we ask:
If that is the case,why would they still permit or tolerate the ritual in the first place? The report goes further:
”Many Catholics in the Philippines perform religious acts of penance during the Holy Week at Easter as a form of worship and supplication. Some believe penance cleanses sins, cures illnesses and even leads to wishes coming true.”
Dear rare mind,do you believe all these?? Does this act cleanse sin,cure illnesses and lead to wishes coming true???
Tags: News
Previous Post

Who Is This Traditional Ruler Implicated In Robbery And Murder? Take A Look!