A look at murder case in Lagos – 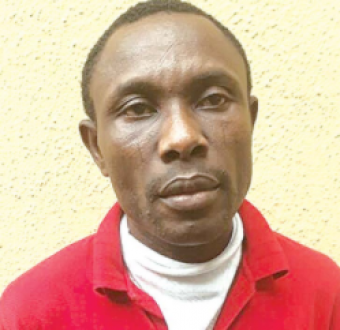 There are kinds of murder cases that I like to hear and file for justice. But definitely,not when someone  sees that she is going to die and does not try to stop it. The picture of the man above is a picture of a 42 year old man,John Owobi is his name. He lives in Lagos with his wife Theresa. The news in brief says that John Owobi beats his wife to death and claimed she poisoned herself.

Well,Mr. John Owobi,the truth is that you beat your wife to death,yes,and she died because,she allowed death to take her in that ugly way.

I know that you who are reading my hand writings think am not serious,being rather harsh or something else,but hey,read my mind too! We have heard series of cases of domestic abuse,women abuse and all of the abuses and have concluded that any person whose life is in danger and whose surviving instinct is in working order and refuses to escape,wants death as well.

Take a look at this : Every baby has what we call surviving instinct,and everyone is born with it. If a baby can quickly cleave or hold someone who tries to throw him up on the tip of his or her cloth to prevent falling,how much more should adults protect their lives when in danger!

Our point is this: Before a woman raises alarm of domestic abuse from her husband,she must have been beaten more than once severely to the point that she already knows that her life is in danger. The truth also is that many of such victims are aware that their lives are in danger and still want to endure. After all,marriage is for better or for worse. But hey,my sister,that is not what life or marriage is or should be. Even the scripture which depicts that marriage is for better and worse does not say that wives should continue in the same roof with their violent husbands. It gives room for separation when your life is in danger.

The truth finally is that if only that woman, Mrs. Theresa has concealed herself in the presence of danger which took her life,she wouldn’t  have died. She would have also saved her life.Pro.22:3 . That woman just wasted her life for nothing,all in the name of love and marriage!!!!

How to be in a right relationship –

Why faking NYSC is a big nonsense –

Why faking NYSC is a big nonsense -