Photo: The man who buries his mother alive over land dispute 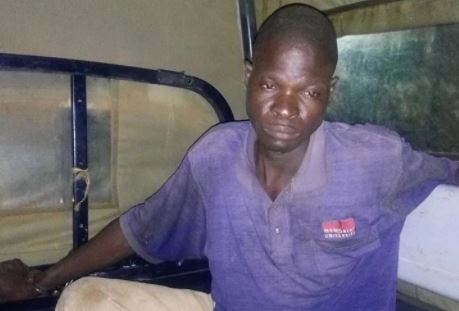 The body of the news,says that a 40 year old man was caught burying his mother alive in a pit latrine he had half way dug. The name of the man is Mr. Chris Wamalwa. At the time the man was dragging his mother to the pit where he had dug for her burial,the woman,Beatrice Nasaka,raised alarm shouting for rescue. Then,residents of Siuno,her village in Kabuchai constituency responded to distress cries from her and rushed over,only to find her already being laid by her son in the grave. A 40 year old man buries his mother over a land dispute?

Okay,more details of the news also says that the reason why Mr. Chris Wamalwa was caught burying his mother alive was that his mother sold their only plot of land to someone! The only land he was hoping to inherit. The woman was asked of course why she would sell the only piece of land that  belongs to her family and she says: “I’m a widow and my only property will save me from poverty. I had sold a piece of plot so that I can use the money for my personal needs”.

The reason why a 40 year old man buries his mother over a land dispute is obvious. The reason why a mother sold the only plot of land her family had is also very obvious. For a start,the woman is elderly and obviously is not being taken care of by her children.If her son,Mr. Chris,had been responsible,taking care of himself,his family,and his mother,am sure Mrs. Beatrice would not have thought to sell their only land to take care of her needs. Why would an elderly woman be struggling at such age,say 70,when she has a son? Her son Christ must have been a very unreasonable and irresponsible man,(This is obvious in his face) so much that the only thing he thought of was to bury his own mother. A 40 year old man buries his mother alive over a land dispute.

Well,we give glory to God after the sad and embarrassing news,at least,Mrs. Beatrice was saved from the hand of her 40 years old son,who almost covered her with sand in the pit for selling a land to take care of her needs. Again,the 40 year old man who buries his mother alive over a land dispute has been handed to police where he will get some senses!!!

says Frank Edoho denies abusing his estranged wife,he is the most romantic man on earth!

says Frank Edoho denies abusing his estranged wife,he is the most romantic man on earth!