”I have been cheated on publicly” Toke Makinwa 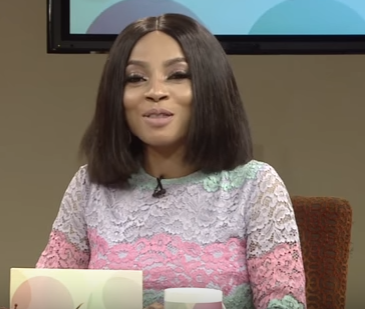 Cheating in a relationship is no longer a news. It no longer brings shocks or trauma,but only some feeling of disappointment and sadness. In relationships,men are found to have more than one girlfriend at a time without the ladies knowing. Whatever fancy they give to one,they also give to the other girlfriend. But can we for this reason say that all men cheat? ”Men who do not cheat have been pressured to have flings outside their committed relationships”– Toke Makinwa.

This is getting interesting. From her voice,we could clearly see that not all men cheat in their relationships. That is true. However,should such men be found by those who cheat,they would be helped and influenced to cheat on their partners. How? ”women are the cause of cheating because you find mothers who know that their sons have five girlfriends welcoming all of them without cautioning them.” Toke Makinwa says. She continues: “Some women are the problem. Your son has four, five girlfriends. You know them, you smile in their faces.We live in a society and the culture that we have unfortunately believes that cheating is….you can’t sue a man for cheating in this country.”

Mothers,you see what you have caused? And I think that Toke is right! See also what encourages men to cheat as noted by Toke Makinwa: “If the man is selling and we are not buying, he would stop. We, women, are the problem. You find a man cheat on his wife cheat on his wife and you find reasons to make excuses for why he cheated. Maybe she wasn’t sleeping with him, Maybe she wasn’t unhappy, maybe she is a witch. I have had that been said to me. I have been cheated on publicly and I never saw women come out to say you know what, what this man did was wrong. You find them say is she the only one? What’s the big deal? Guess what, your child would go through it” Gbam!

You see,”Men who do not cheat have been pressured to have flings outside their relationships” and women are practically the cause of it! So women,would you stop shouting and complaining please?

Finally,I must say that regardless of the fact that women are the cause somehow for their men to cheat,am sure no reasonable or responsible woman would ever go to a married or engaged man and ask him out. Men have always been the ones knocking most times.

Any man who wants to cheat would always cheat no matter what; And any man who frowns at it will never cheat on his partner no matter the influence or environment he finds himself!

To The Married And To Those Broken In Heart, Do Not Give Up! – Dame Judi Dench the 82 year old woman who finds love again

To The Married And To Those Broken In Heart, Do Not Give Up! - Dame Judi Dench the 82 year old woman who finds love again